This is the story of MFL v. Manitoba, a case where Manitoba’s public sector unions are challenging a law known as The Public Services Sustainability Act. The unions say it is unconstitutional because it interferes with their collective bargaining rights. The Government of Manitoba says, not so fast, and besides the Act hasn’t even been proclaimed into law yet.

We are scheduled for 13 days of witnesses, whose evdience will help the court, and us, work this all out.

Let’s start off with the basic question – why are we here?

What we know generally, and are about find out more in very great legal detail, is that the Public Services Sustainability Act freezes the wages of employees in the public sector in Manitoba. Most of these people are represented by public sector unions, who object to this as an unconstitutional interference with the collective bargaining process, where negotiations over wages and benefits are almost always the main events.

The Government of Manitoba claims that the wage constraints are necessary “to protect the sustainability of public services” in accordance with the principles of “responsible fiscal management.” In other words, if Manitobans are going to be able to continue to receive the same level of public services they expect, the Government won’t have enough money to keep providing those services, unless they are able to cut back on the costs of public labour.

Hmmm. Well I suppose, that may be true, but it does of course depend on what other fiscal choices are being made. Not to second-guess the experts in the Ministry of Finance, but, as a matter of public policy, and the public interest, if you are going to cut, freeze, or limit the income of 123,000 people (about 20% of the workforce), and you are claiming that it’s because we, the people of Manitoba, need it, I’d like to see some clear and compelling reasons to justify forcing just this one group of people to make this kind of sacrifice for the benefit of us all.

The Manitoba Federation of Labour and the public sector unions say that the PSSA is unconstitutional because governments cannot legislate their collective bargaining rights away. Apparently, the Supreme Court of Canada agrees with them, but we will find out what the Government of Manitoba has to say about that. There has to be something. That’s why there’s a trial.

let’s got to court! 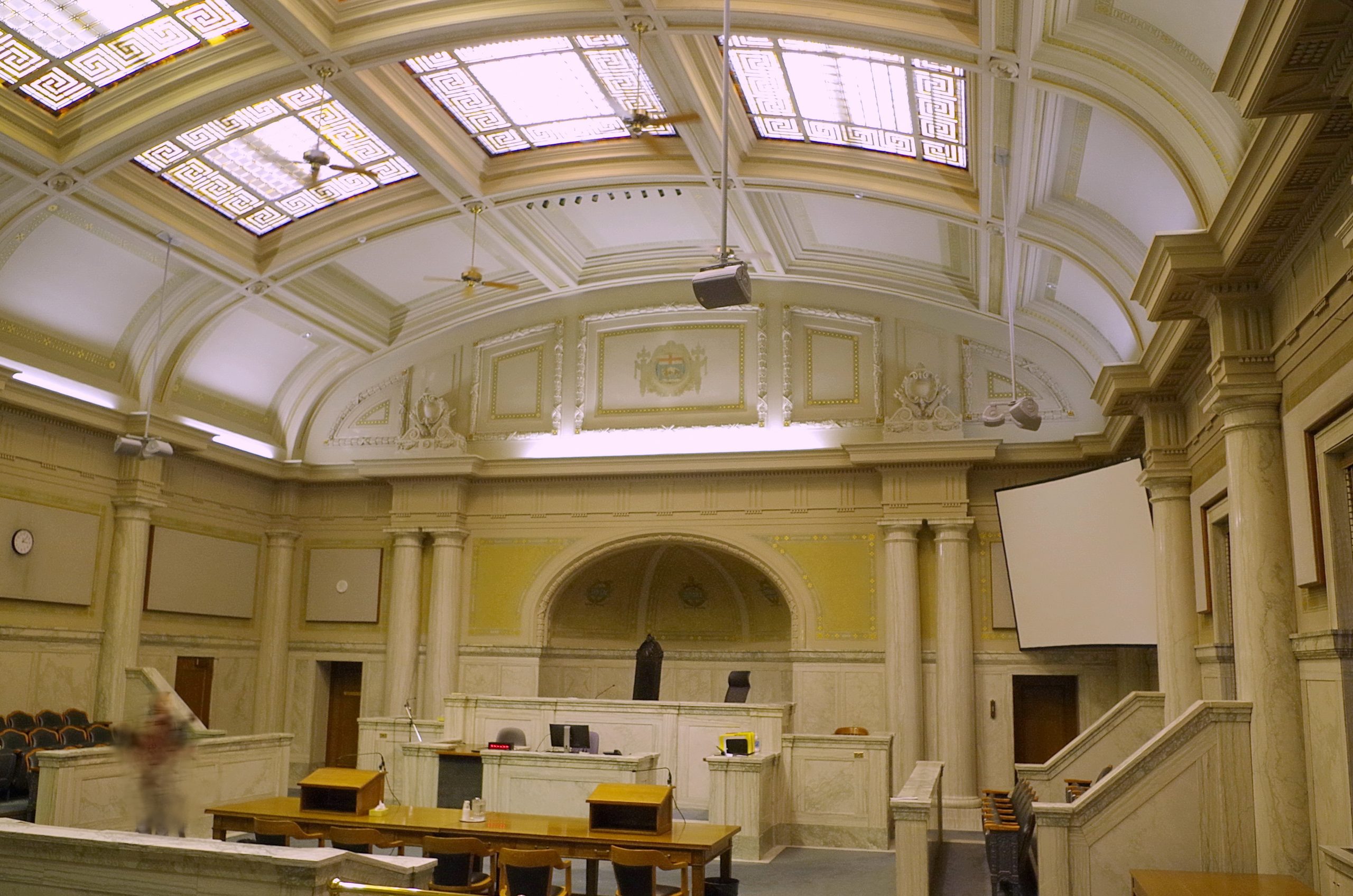 It’s all marbled and columned. And it’s so big! That high vaulted ceiling must make this room about two stories high. It goes to the top of the courthouse anyway, because that’s a stained glass ceiling that lets the light in. Impressive indeed, as it is undoubtedly meant to be. But as we will soon learn, it is acoustically challenged. The dome that caps the courtroom off is a perfect sound absorption chamber, a place where human voices go up to get dampened and die.

It takes approximately two seconds for the lawyers to start complaining that they can’t hear anything. And they aren’t alone. Hooray, another courtroom may be ready later this week.

Adrenaline is pumping and excitement is high, although none of the lawyers look like they’re about to upchuck their breakfasts, like I always did. Garth Smorang, lead counsel for the Plaintiffs (the Manitoba Federation of Labour and 28 unions) is running here and there, playing pleasant host. He’s chatting with clients, the other lawyers, and spectators, and showing Kevin Rebeck and Michelle Gawronsky where and how they will testify. It’s good client management and a little adorable.

The Government’s head lawyer, Heather Leonoff, sits solidly in her chair, silently waiting for the show to begin. She watches closely and carefully, but says very little. It’s a position of power, and it telegraphs – beware. Like her namesake, the lion, this is the crouch of a predator, patiently waiting for any weakness signalling that it’s time to pounce.

I’m sitting roughly in reporter’s row, the second last row on the right-hand side of the room. This happens to be on the Government’s side, behind their lawyers, but that doesn’t mean anything. In criminal matters, people usually sit on the side of victim or accused, depending on who they are supporting, but no one cares that much in civil cases. In any event, reporter’s row has nothing to do with sides, but rather sitting in the best place to see and hear everything clearly. A young man, who I think is from the Winnipeg Free Press, is sitting a few seats over in my row, recording the proceedings and furiously taking notes in his double-action duo of black-bricked cell phones. He’s probably a little miffed because my seat is better.

Our judge for this trial is Madame Justice Joan G. McKelvey who has been a judge on the Manitoba Court of Queen’s Bench since September 27, 2001. She’s one of the most experienced judges on the Court of Queen’s Bench, and it shows. She enters with a quiet, calm dignity. This is good news. Lawyers can be noisy. It’s the trial judge’s job to turn the volume down. No better way to control that then setting the baseline tone at muted, and mild.

The first order of business is to introduce the legal teams. Garth Smorang for the Plaintiffs does the honours. I can’t hear him, so I don’t actually learn their names until later, but let’s meet them all now anyway.

For the Unions, the Myers Team:

For the Government of Manitoba:

With the preliminaries over, it is now time for some opening statements …

← Opening Statements
Back to The Story