A peek intothe whys and hows of legal doings

unconstitutionality and how it works

Ever heard a politician or one of their defenders say “hey, they’re the Prime Minister or President, they have the power” so whatever it is they have done, it’s Ok? It’s totally untrue. In Western democracies, which of course includes Canada, governments govern; they do not “rule”.

If you have never heard of the “Rule of Law” don’t worry, you’re not alone. I had never heard of it until I started law school, and even then, it took me some time to understand what it was all about.

The question the Rule of Law answers is – who is in charge? Sorry leaders, cabinet ministers, and elected representatives, it isn’t you. You do have the powers of government, but that doesn’t mean you can do whatever you want with them. The Rule of Law rules, and that means, if you go offside, the law will overrule you.

There are, in fact, any number of ways that the law limits the exercise of public power. But by far the most important one is any country’s constitution. Although we’ve always had one, thanks to an English statute, Canada’s constitution came home in 1982.

And look, right there in the preamble to Part I – Canadian Charter of Rights and Freedoms:

Whereas Canada is founded upon principles that recognize the supremacy of God and the rule of law.

No comment on the deity part, but the Charter is clear – under our constitution, the rule of law reigns supreme.

“Unconstitutionality” is a big word and an abstract concept that, on its own, tends to suggest that something is wrong in some important way. And that’s true.

But what it really means is that whatever the government is doing is not just wrong, it is a violation of some fundamental right or freedom that we, the people of Canada, have decided are so essential that in no way can the government take them away. The government is, in effect, not only exceeding their authority, but doing so in a critically bad way.

You might wonder, however, that if these things are so fundamental, then why should we ever need to argue over them? As with all legal things, the devil is in the never-ending details. Under our common-law system, the courts decide what these principles actually mean and what they cover on a case-by-case basis. (It may not be the most efficient way to do things, but that’s another long jurisprudential debate.) 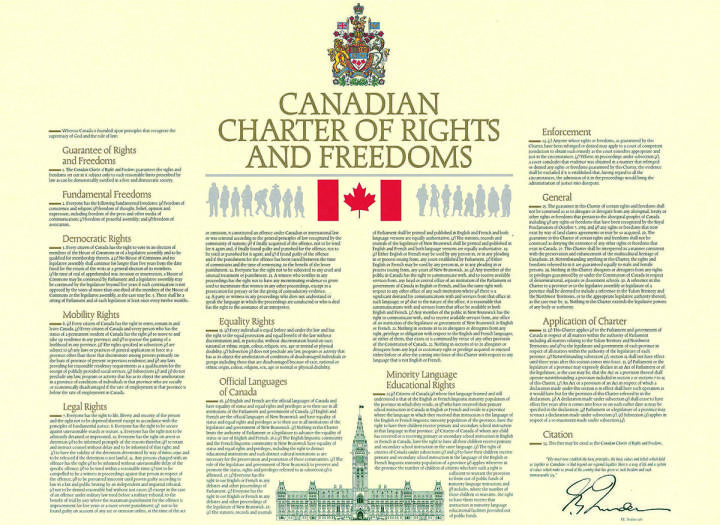 In any event, even if a law is found to be unconstitutional, that’s not the end of it. The government can still argue that they can keep it anyway, due to what’s known as a Section 1 defence:

Section 1: The Canadian Charter of Rights and Freedoms guarantees the rights and freedoms set out in it subject only to such reasonable limits prescribed by law as can be demonstrably justified in a free and democratic society.

Section 1 is a balancing act, and a recognition that sometimes the practical reality is that, fundamental or not, the government has a good reason to trespass on this otherwise sacred territory. But the government cannot just say – hey we have to; they have to prove it. A bunch of legal hurdles are set out in some detail in what’s known as the Oakes test. And the government has to have enough evidence to support being able to make these leaps.

It’s a pretty high bar and it should be – they are, after all, encroaching on sacred Canadian rights and freedoms. Governments rarely make it over, but that doesn’t stop them from trying, every time.

The PSSA was passed by the Manitoba Legislature and given royal assent on June 2, 2017.

So it is a law. But it hasn’t been proclaimed yet, so it isn’t in force. (This legal technicality runs around making trouble all over this case.)

Anyway, the biggest problem is the limits on wages set out in Section 12 (1). This set model of permitted wage increases is sometimes known as “the PSSA pattern” because it is really annoying to write or say it all out.

You can find the full act here.

EMPLOYEES REPRESENTED BY A BARGAINING AGENT

9(1)        For the purposes of sections 10 to 15, “sustainability period”, in relation to employees represented by a bargaining agent, means the four-year period that begins or began, as the case may be,

(a) on the expiry of the term of the collective agreement or arbitral decision that governed their rate or rates of pay on March 20, 2017; or

10          In every collective agreement entered into or arbitral decision made before the end of the sustainability period, the rates of pay and additional remuneration must be based on 12-month periods.

No restructuring of rates of pay

11          No collective agreement or arbitral decision may provide for the restructuring of rates of pay during the sustainability period.

Maximum increases in rates of pay

12(1)       Subject to subsections (2) and (3), no collective agreement or arbitral decision may provide for an increase in a rate of pay during the applicable sustainability period that is greater than

(a) 0 % for the first 12-month period of the sustainability period;

12(2)       If employees governed by a collective agreement or arbitral decision received no pay increase for a 12-month period that began in 2016, on the recommendation of the Treasury Board, the Lieutenant Governor in Council may by regulation shorten the sustainability period for those employees to three years.

(a) 0 % for the first 12-month period of the sustainability period;

(a) the resulting increase in the cost of additional remuneration is not greater than the savings achieved by rates of pay less than those permitted by section 12; and

(b) the increase or new additional remuneration is approved by the Treasury Board.

Use of negotiated sustainability savings

14(2)       For the purpose of subsection (1), “negotiated sustainability savings” means an ongoing reduction of expenditures as a result of measures agreed to in a collective agreement that reduce or avoid costs.

These sections aren’t technically part of the constitutional challenge, because they don’t matter if the other sections above (9-14) are declared unconstitional. (They are kind of a “let’s see how much damage we can do with our unconstitutional law.”)

Be that as it may, the retroactivity provisions are still very problematic in many ways, and in my view as well as others, also objectionable, and should have never been made.

EMPLOYEES REPRESENTED BY A BARGAINING AGENT

15. If a collective agreement or arbitral decision, whether entered into or made before or after the coming into force of this Part, provides for:

(a) a restructuring of rates of pay contrary to section 11;

(b) an increase in a rate of pay contrary to section 12; or

the provision of the agreement or arbitral decision is, to the extent of the inconsistency, of no effect and deemed never to have taken effect, and the parties are deemed to have agreed to the maximum increases in compensation permitted by this Part for employees represented by a bargaining agent.

Translation: If anyone dares to ignore the PSSA wage pattern even while the Act remains unproclaimed, anything they do that violates the PSSA restrictions will be retroactively rubbed out the second the PSSA is finally proclaimed.

28. Every amount paid — including amounts paid before the coming into force of this Act — to any person in excess of the amount that should have been paid as a result of this Act is a debt due to the employer, in the case of an excess rate of pay, or to the government, in any other case.

Translation: And if you receive any money that is over and above what the PSSA would have given you if it had been proclaimed, you will have to pay it all back as soon as we proclaim it.

The charter challenge to the Public services sustainability Act

Section 2 of the Charter sets out the fundamental rights and freedoms. The one at issue here is Section 2(d): Freedom of Association.

Labour fought for 30 years to have collective bargaining protected by Section 2(d). And in 2007, in a case known as B.C. Health Services, the Supreme Court of Canada finally agreed. It’s not an absolute right nor a guarantee of results, but the Supreme Court has spoken – government employers cannot “substantially interfere” with their employees’ right to negotiate using the process of collective bargaining.

The Public Services Sustainability Act of Manitoba imposes wage freezes and limits on collective agreements that come up for renewal, and thus the public sector unions are claiming that it is indeed substantial inference with their collective bargaining rights. The Government of Manitoba’s response is, essentially, that there is either no interference, and even if there is, it isn’t that much.

Even they are wrong, the Government of Manitoba still has a Section 1 defence.

Section 1 is also known as the “notwithstanding clause” because it allows governments to do things (in very limited circumstances) “notwithstanding” the fact that they are actually unconstitutional.

In this case, the Government of Manitoba is probably going to have the hardest time getting over the first hurdle –  proving whether the wage constraints in the Public Services Sustainability were necessary given the Province’s fiscal concerns. And that’s why we heard more than I ever wanted to know about budgets, deficits, the debt-to-GDP ratio, bond market, and consolidated financial statements during the trial.

In short, the public sector unions will be trying to prove that the Public Services Sustainability Act is unconstitutional because it substantially interferes with their collective bargaining rights. And, that the government cannot rely on Section 1, because there wasn’t an important enough need for the wage constraints, and besides, the way the Government of Manitoba has chosen goes way farther than they needed to.

The government will say – wrong on both counts.

Justice McKelvey gets to decide who is right.

2. Everyone has the following fundamental freedoms:

(a) freedom of conscience and religion;

(b) freedom of thought, belief, opinion and expression, including freedom of the press and other media of communication;

(c) freedom of peaceful assembly; and

1. The Canadian Charter of Rights and Freedoms guarantees the rights and freedoms set out in it subject only to such reasonable limits prescribed by law as can be demonstrably justified in a free and democratic society.

According to the Supreme Court of Canada, in this decision of 2007:

Freedom of association guaranteed by Section 2(d) of the Charter includes a procedural right that prevents “substantial interference” with collective bargaining.

To constitute substantial interference, the intent or effect must seriously undercut or undermine the activity of workers joining together to pursue the common goals of negotiating workplace conditions and terms of employment with their employer.